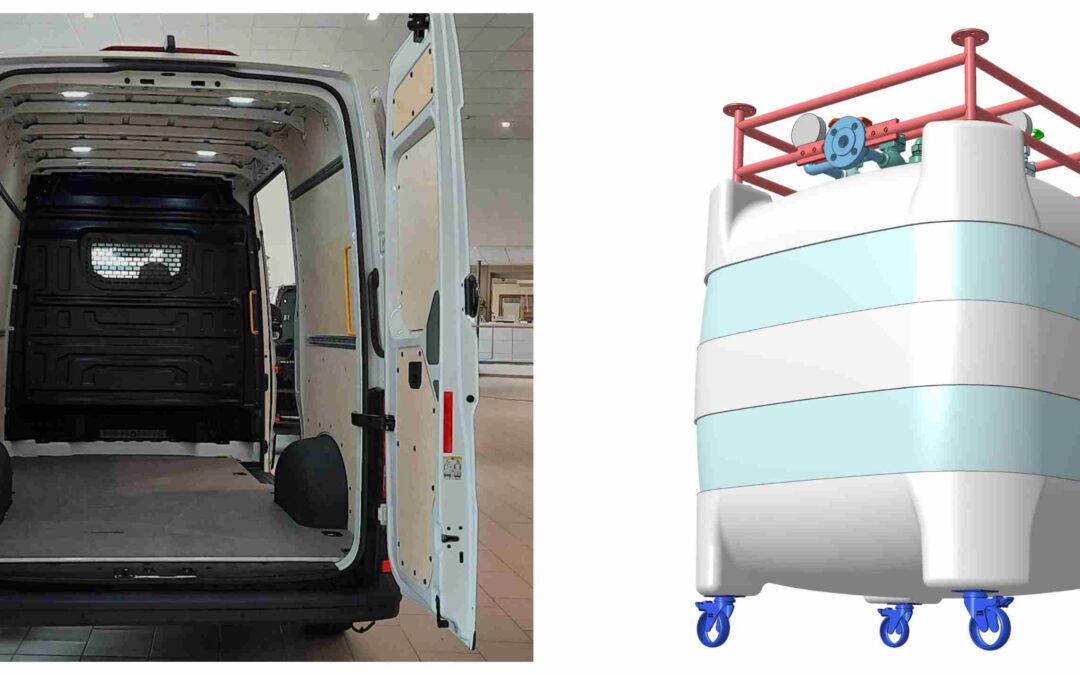 Mobile refueling station for liquified biogas (bio LNG) or natural gas (LNG) – such a prototype vehicle, with just 3.5 tons of gross vehicle weight is being built in Tri-City. In that, usage of LNG as an alternative energy source on a much larger scale – public transport, production plants and office buildings will be possible. The mobile refueling station will be built to the order of Maritime Institute Gdynia Maritime University; the leader of the Liquid Energy project.

– There are no such stations in the world yet – says dr hab. prof. UMG Grażyna Pazikowska-Sapota from Maritime Institute Gdynia Maritime University; project coordinator. – Our prototype mobile LNG fuel station is to be built by the end of June 2022. Its construction is to change the LNG distribution system. The idea is that bio-LNG and LNG could be delivered to smaller recipients who so far had no chance to use this alternative energy source.

Currently LNG and bio-LNG is transported by LNG tankers, by sea, or in designated trailers with pressurized tanks, by land. The mobile station is designed to be more versatile. In that, small amounts of liquefied bio-LNG or LNG (up to several hundred liters) will be able to be transported from the producer – directly from the biogas plant with a liquefaction plant or from the refueling station – to the local recipient.

– This is an absolute novelty on the market of liquid methane distribution as an alternative energy source – says Paweł Warszycki HIE-RO at the University of Rostock, one of the German partners of the Liquid Energy project..- A new generation cryogenic container (non-vacuuming) will be used in a vehicle with a gross vehicle weight of 3.5 tons. A mobile refueling station for liquefied methane with a temperature of -163 ° C produced from natural gas (LNG) or biogas (bio-LNG) will be built.

Thanks to this innovative technology it will be to possible to use bio LNG and LNG as an energy source on much larger scale – by selling and supplying small amounts of this alternative fuel to the local, retail recipients, such as public transport (for use it in trams, city buses, water trams), small production plants and office buildings. The mobile station will be able to deliver fuel up to 100 – 150 km.

The tender for the creation of the station was won by a consortium of two companies – Baltic Engineering Flare GmbH and Ferdinand Schultz Nachfolger Fahrzeugbau GmbH. The owner of the station will be the Maritime Institute Gdynia Maritime University, however, it will be widely used as a prototype to demonstrate the technical capabilities.

The European Union (EU) is committed to full decarbonisation as the basis to achieving climate neutrality. However, it requires a complete overhaul of the energy system and its infrastructure by 2050. This goal is at the heart of the European Green Deal, which includes a wide range of policy-enhancing plans to mitigate climate change. Among other things, methane can be used as an alternative fuel to traditional fuels. Biomethane in particular is perceived as an energy source supporting the efforts of the European Union countries in this area

The climate benefits of biomethane are similar to those of renewable electricity and synthetic diesel fuel (e-fuels). The use of post-production waste for the production of biogas or biomethane, mainly from agricultural production (slurry), agri-food or municipal services, may even cause the so-called negative emissions.

The mobile station will not only be an innovative and functional form of low-emission, alternative energy supply, but will also contribute to the implementation of Poland’s energy strategy, which assumes, inter alia, an increase in the share of Renewable Energy Sources (RES) in all sectors of the economy and gas in the energy mix (up to 17 -33% in 2030).

Photo: A car on the basis of which a second-generation mobile station and cryogenic container will be built, © Baltic Engineering Flare GmbH, 2021